The work of countless solar professionals and their organizations across the solar value chain comes together at the December 7 O&M and Asset Management Conference in London.  Standardisation initiatives along two parallel tracks will converge, in what leaders are calling a toolkit for solar operations and maintenance (O&M) best practices guidelines and complimentary contract templates, at the London event. 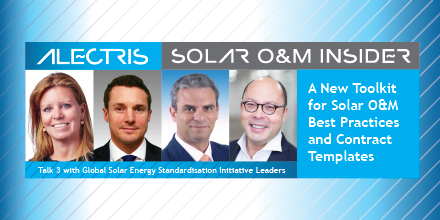 To get an insider’s perspective on what the industry can expect from these standardisation initiatives at the December event, the Solar O&M Insider talked with program leaders.

For the full Solar O&M Insider discussion in Talk 3 of this series, listen to the podcast or reference the transcript here.  You can find Talk 1 of the series, The Upcoming SESI Global Solar O&M Contract Template, here.  Talk 2 of the series, COP23: Stage for Global Alignment on Solar Standardisation, is here.

How They Work Together: O&M Best Practices Guidelines and SESI Contract Templates

“The O&M Guidelines came out of a workstream within SolarPower Europe, which represents companies active in the solar space across the value chain. One of our workstreams is on operations and maintenance. Within that workstream, it’s clear that within Europe, until this year, we didn’t have best practices guidelines on how O&M should be done on solar plants. There’s some work being done in the U.S. but nothing in Europe. So, within the workstream, we put together a set of best practices guidelines which were launched at the end of last year, 2016,” explained Bruce Douglas.

According to Douglas, SolarPower Europe has been updating the O&M Best Practices Guidelines over the last year, of which “contracts were clearly an important part, but just one part of it. The guidelines cover everything from health and safety, power plant operations, management systems, data, spare parts, and so on. But what was clear was the contracts were an important part, between the project owners, the asset manager, and the O&M supplier.”

At the same time, the Terrawatt Initiative and IRENA were developing, with a number of the leading legal firms around the world, the Standardisation Initiative. Douglas said part of this SESI work was an idea to have a standard contract for O&M. “It fit perfectly with the work we were doing. It’s avoiding the overlap. Working very closely with the Terrawatt Initiative, we’ve been providing feedback and input from an industry perspective, so players such as Alectris are providing leadership and input to the guidelines, but also specifically to what we see as a vital tool in the process of streamlining and reducing the cost of solar is this tool, the O&M contract, the standard contracts for O&M.”

Described by Vassilis Papaeconomou, “The best practices are not a legal document. The purpose has been to prescribe out of the experience gained throughout the years in Europe what should the best practices be for providing solar O&M services. Although we were seeing similar documents focusing on maintenance and, on-site work, we decided from the very beginning to include both the operations and maintenance of the work set. We’re not just focusing on the technical field work but also discussing anything that has to do with the operations.”

The SolarPower Europe O&M Best Practices Guidelines is a manual, a set of definitions, minimum requirements, best practices and recommendations companies can use to operationalize and streamline organization activities against a stated norm.  The SESI seven contract templates provide a means to streamline the legal aspect of solar development and operation.

According to Jean-Pascal Pham-Ba, “the contracts say when you as an O&M provider, for example, what you need to provide. Then the question is how you will provide it and what standard quality you will provide it? Having guidelines like the one developed by SolarPower Europe is something which is really crucial for the parties to the contract, especially for those who are not the O&M provider but the professional. In a lot of cases, it’s the asset owner and the banker that we are talking about. It’s something to which they can refer related to the expected behavior of an O&M provider in the performance of the contract. That’s helpful to raise the level of quality of what they are doing and to inspire trust with the asset owner and the banker, the lender.”

Version 2.0 of the O&M Best Practices Guidelines will be released at the December event.  Papaeconomou explained the updates the industry should expect to see: “There have been substantial changes which are going to be announced in December in London. Apart from fine-tuning the existing document and collecting all the feedback throughout the last months, we have worked on health and safety. We have included a section for technical asset management.  The reason we did that is because, in some regions, O&M is understood as technical asset management and in some others, as just maintenance. We now cover both maintenance operations and technical asset management in one document.”

Work was also done on KPI (Key Performance Indicator) definitions and to align the best practices document with the SESI contract template.  “We added an additional section about contractual guidelines. The purpose of the document is not to go into the legal details but to give the framework of providing operation and maintenance services and key points for O&M contracts, which are in this case completely aligned with the O&M standard contract that we are working on in the workstream of SESI,” said Papaeconomou.

The event in London describes standardisation as an opportunity to facilitate higher standards and lower costs, two pillars in the solar PV industry.

She outlines the path to raise standards as “taking the existing expertise with all the related market parties and combine that with the simplified [SESI] contracts, which deal with an appropriate balance of risk and whereby the most appropriate party is attributed with the relevant risk. Rather than parties going into project development still trying to reinvent the positions of each party and the balance between contracts, parties can trust the standardized agreement has taken on board all of the experience of the past years and created balance that enables the parties to feel comfortable with the standard set of documents.”

From the Terrawatt Initiative perspective Pham-Ba outlines, “Higher quality standards, in particular, are providing more confidence with the financiers in the capacity of the assets providing the cash flows that are necessary to pay back the financing. Consequently, it means that they are ready to give up a little part of the risk premium they usually take. On capital intensive equipment like solar, it makes a huge difference.”

A Note for Attorneys on the SESI Contract Templates

Most solar industry companies and organizations targeted by these standardisation initiatives have attorneys. In answer to how these attorneys should view contract templates, Dingenen said, “Embrace this set of documents. Trust the people who have been doing this for years. Help yourself by lowering the cost of your own project development, and spend the time wisely by focusing on innovation rather than spending costs on agreements entered into many times.  Finally trust the voice of the market, of the suite of contracts. “

Pham-Ba added, “I’ve been an attorney and also an in-house counsel for many years. At some point, doing these contracts over and over again becomes really boring. We think you can spend your time more wisely doing innovation and thinking about how opportunities will happen.”

With the standardisation Initiative template contracts, “you can have the feeling this will take away from the law firms. But from what I know and what I’ve lived honestly is the most interesting part of the business you are not taking away from that,” he concluded.

Sign up to receive the latest podcasts, content and updates to help you maintain and manage your solar PV assets.

You have Successfully Subscribed!