SESI is a joint program of IRENA – International Renewable Energy Agency and The Terrawatt Initiative, along with SolarPower Europe and the Global Solar Council.  Its work groups are focused on aggregating the current best practices within the solar industry into a set of seven contract templates covering all phases of solar development, finance, construction and operation.  This work has been “open at the top” seeking new and innovative ways to create contract templates to reduce solar transaction costs “by having a single set of generally accepted risk allocations,” describes Jean-Pascal Pham-Ba, Secretary General, The Terrawatt Initiative.

At COP23, SESI leaders are moving the acceptance of the contract standardisation effort to a critical stage with no less than global alignment on solar standardisation in view, as it pertains to the legal framework capable of accelerating solar adoption worldwide. 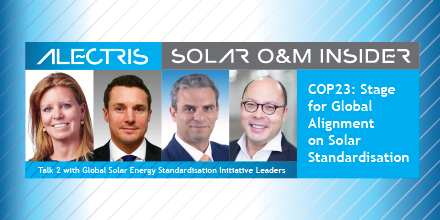 To get an insider’s perspective of the SESI effort, the Solar O&M Insider talked with leaders of this initiative and those involved with its operations and maintenance (O&M) work stream.

This special multipart series of the Solar O&M Insider features, in alpha order:

For the full Solar O&M Insider discussion in Talk 2 of this series, listen to the podcast or reference the transcript here.  You can find Talk 1 of the series, The Upcoming SESI Global Solar O&M Contract Template, here.

COP23 and Its Importance to the SESI Program

As the world’s nations look to bridge the climate mitigation goals of the Paris Agreement with the mechanics of realizing those goals, SESI will provide a streamlined contractual structure to speed finance and development. What is the role of COP23 to the SESI program?

“We need absolutely to socialize as widely as possible this idea of standardisation and show the benefit for each of the stakeholders of having a standardized set of documentation available in the market,” said Pham-Ba. “We want to engage not only with our peers in the industry and in the financial markets but also with other stakeholders, the governments in particular. COP23 is a good forum to meet with the high-level representatives of governments coming from all across the world.

But there is also the presence of the civil society, the NGOs in particular, that are also very important to embark into this dialogue. It’s very important that they understand we are on the same side. We are actually trying to make it happen as fast as possible because we have also, as they do, the sense of urgency.”

Bruce Douglas of SolarPower Europe and Global Solar Council explains, COP23 “gives us a great platform to discuss with decision makers within Europe but also internationally on the urgency of the climate issue and the role that solar can play in it. COP23 is a platform for us to discuss with decision makers, and start rolling out this program of standardisation for solar development in current markets but also in emerging markets of Africa and Southeast Asia.”

This event will introduce our work on the “Global Solar Energy Standardisation Initiative” which aims at standardising contracts to streamline and scale up the global development and financing of solar projects, to contribute to meeting the objectives of the Sustainable Development Goals and the Paris Agreement. Participants from various stakeholder groups will be invited to discuss the objectives, structure and design of the Initiative, and explore ways to ensure successful uptake of the standardised contract package.

How the SESI Contract Templates Will Speed Solar Adoption

The SESI contract templates will speed solar adoption worldwide including in the following ways:

“Our members face enormous complexity when they enter emerging markets,” said Douglas. “You can imagine for a developer entering markets in Africa, for example, or three, four different markets over the period of a few months or a year, they face different contracts, different PPA contracts, different structures, different legal requirements, they almost start from scratch each time. The transaction costs are high, the time frames are long, the complication is there.”

The SESI contract templates standardize the process.  With the adoption of the suite of contracts by government leaders the legal framework can be greatly simplified.

A huge advantage of this standardisation initiative is that its open source, explains Douglas. “Our members, which tend to be from developed countries who’ve already gone through the process of developing solar, are happy and really delighted the Terrawatt Initiative and IRENA have opened this standardisation up to anybody. Organizations and companies from those emerging markets can use it themselves as a basis, an internationally agreed basis, for contractual relationships in solar.”

Another example of how the SESI contract templates will help lower solar costs was brought forward by Pham-Ba: “When you start to negotiate the project finance with the bank, you’re not only paying interest on the loan but you’re also paying fees for arrangement and negotiation of the contracts. Basically, if we can have some banks or most of the banks saying, ‘Well, we’re reducing maybe 80% of the fee just because the parties are using the standardized documentation’ it would be a complete change in the industry. A very rapid shift to this documentation is to be expected because no one wants to pay five times when they can only pay one.”

Sophie Dingenen of Bird & Bird elaborated saying,  “If you look at the normal time frame project development goes through and the time that the negotiations of each of the agreements takes, the fact that we now are developing a very standard suite of contracts completely aligned even when we might have different contractors and banks and market parties as parties to the agreement” you can see a direct parallel between the intertwined and integrated contracts and the reduction of development costs. “The force majeure on one contract is completely aligned to the others. Where, for example, financing parties require certain availability guarantees to make sure revenues are there to cover the debts, this is worked into all of the contracts to make sure that there’s no gap between them from the first stage,” she explained.

“Once the agreements are all negotiated separately, then you put them together and there are not going to be holes in them” which can result in the financing party stipulating a return to the drawing table to re-negotiate the agreements. “That’s no long going to happen. It has an immediate effect on the transaction cost of the development of the solar projects, which kickstarts the solar industry,” said Dingenen.

All parties are able to rely on years of experience, not only on the contract side of things but mostly on the technical side of the solar market, Dingenen explained.  “There’s a whole development of this suite of contracts that takes away a lot of risks, thereby increasing the appetite for market parties to invest more in the development of solar projects,” she said.

The reduction or equal allocation of risk to all parties is also part of the O&M contract template. Maintenance contracts will be initially more relevant in developed solar markets, points out Douglas saying, “where there’s already a significant solar installation, those contracts for operation and maintenance are crucial, from a transactional point of view, to simplify the process.”

The protection of lenders and owners from risk is part of three key elements highlighted in the O&M Standard Contract.  The others include the introduction of enough flexibility in the contract to allow for Lenders and Owners to switch their Contractors without the burden of “change management” and the goal to help regulate operations in a pragmatic way in order to minimize the cost of operations.

“This is going to be a key point for an exponential growth in this industry,” said Vassilis Papaeconomou. “We do see this growth in the last years but the growth has been driven from the cost reduction. We’re just missing the last important detail, which is standardisation, to make it really something that we further grow exponentially and sustainably on the whole planet.”

Connecting the Dots between COP23 and the Solar Industry

The average person in the solar industry doesn’t understand the implication of COP23 on their day-to-day business. Yet the global goals and the mechanics to reach those goals profoundly affect renewable energy development including solar.  Reducing friction in the market for further solar deployment will impact industry players across the globe.

Pham-Ba explained, “Industry players do feel a little remote from the COP journey and the UNFCC conference of the parties, the 23rd. That’s precisely what we are trying to make is to connect the dots between what is, mainly an intergovernmental international process and the industry because these persons in the UNFCCC (The United Nations Framework Convention on Climate Change) and in these negotiations, the parties are negotiating climate goals.”

He went on, “The United Nations, in 2015, set the sustainable development goals  and they are also setting general high goals, like the SEG7, to obtain affordable and reliable and modern energy for all or SEG13, which is climate actions. But beyond what these parties are negotiating and trying to organize from a governmental perspective, the feeling that we have is we concretely don’t really know how to achieve that. COP21 in Paris has given a real sense of political momentum, to the goals and the targets and what needs to be done in order reverse global warming.”

“Beyond the spreadsheets and the figures, it’s very difficult for them to know what to do. That’s precisely what the industry can do to help convert these general goals into concrete actions and concrete mechanisms in order to reach the level of development and deployment which is necessary to achieve these goals,” he said.

Sign up to receive the latest podcasts, content and updates to help you maintain and manage your solar PV assets.

You have Successfully Subscribed!